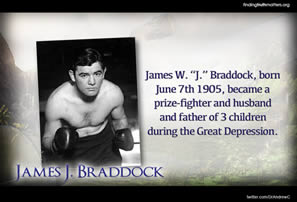 Boxer, James “J.” Braddock was born June 7th 1905 and became a prize-fighter. After becoming a husband he then had 3 children during the Great Depression.

I’m not the only one to think that boxer, James. J. Braddock’s story is one of the most inspirational stories of human triumph. So does Russell Crowe and Ron Howard (“Richie Cunningham” from Happy Days, now a major Hollywood Director). They immortalised the Braddock story in the movie, The Cinderella Man.

James Walter Braddock (it was convention for boxers of that era to adopt the middle initial of “J”) was a boxer who fought around New Jersey during the Great Depression. In desperation to earn enough to support his large family he had incurred a chronic hand injury after prolonged boxing after he broke it. Unable to continue, and being soundly beaten by all comers, he took a job on the docks unloading ships. This was back in the day before containerised shipping and a dock worker was required to unload hundreds of sacks of grain by hand. And because Braddock’s right hand was so chronically damaged he mostly used his left hand. 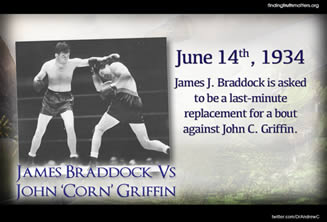 A few years went by and people had largely forgotten about the Braddock the boxer. Then in a bizarre turn of events Braddock was asked by a boxing promoter if he would step into the ring against the number one contender for the World Heavyweight Title after the previous fighter withdrew for medical reasons. Despite Braddock’s reluctance, he agreed to. What he was about to realise was that his long early morning walks to docks had strengthened his legs. His days of breathing in sea air had strengthened his lungs. His favouring of his left hand had both strengthened his previously weak side and also allowed his damaged hand to fully recover. The gruelling day in day out of hauling heavy sacks of wheat had also developed his stamina and strength beyond any limit he had ever attained while training as a professional boxer. Braddock won his bout. He then went on to defeat the previously undefeated World Champion. 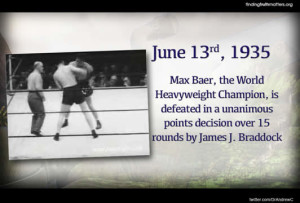 Braddock’s journey was just as (if not more) important as his destination to becoming the undefeated World Heavyweight Boxing Champion. In a similar way, your time of study, as gruelling and as tedious as it is, is doing you more benefit than you realise. It is preparing you for battles of eternal consequence with a strength and a reserve that may surprise you. For Christ’s sake, keep studying so that He might use you one day to win a battle that you could only win if your journey has been as tough as it is!